My go-to recipe for stuffing comes from Cooks Illustrated — it takes some time, but it’s straight-forward and delicious. My only complaint is that the original version makes too much stuffing, especially if you’re not planning to stuff the turkey. And let’s face it: Cooking the stuffing on the side just gives you more exciting options for the turkey itself (e.g., spatchcocking, deep frying, etc.).

So here, I’ve scaled the recipe back a bit to make it more manageable, and modified it for baking in a casserole dish. It’s suitable for a 13×9 baking pan or 3-quart casserole. 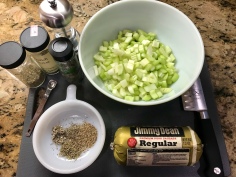 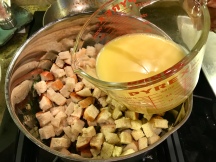 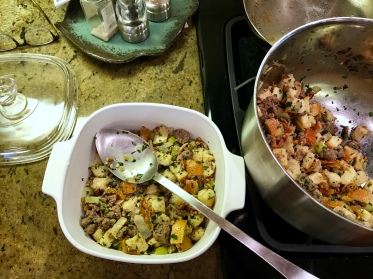 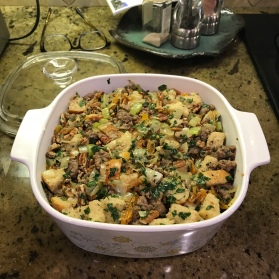 Preheat oven to 225 degrees. Divide the bread into thirds; save 1/3 for another use, and cut the rest into 1/2-inch slices. Arrange the slices in a single layer on a sheet pan and bake for 30-40 minutes. The bread should end up dried but not browned. Once it has cooled slightly, cut the bread into 1/2-inch cubes and set aside.

Turn the oven up to 350 degrees. Spread the pecans out on the sheet pan and toast in the oven until fragrant, about 6-8 minutes. Set aside.

Preheat the oven to 400 degrees.

In a large skillet over medium heat, cook the sausage (casings removed, if there are any), breaking it up into bite-size pieces, until browned and no pink remains. Transfer to a large bowl and set aside.

Remove excess grease from the pan, then add the butter. Saute the onions and celery until soft and translucent, about 6-8 minutes. Add the sage, thyme, marjoram and pepper and cook 1 minute more. Transfer to the bowl with the sausage and stir.

Stir the parsley, apricots, pecans and salt into the sausage mixture, then top with the bread cubes. In a separate bowl or measuring cup, whisk together the broth and eggs, then pour over the bread cubes.

Fold the bread cubes into the sausage mixture until thoroughly mixed. Spread the stuffing out into a buttered baking dish, tamping it down gently with a spoon or spatula to fill the dish evenly. (At this point you can cover and refrigerate overnight if desired. Let it sit out at room temperature for about 30 minutes before baking.)

Dot the surface of the stuffing with small bits of butter. Cover with a piece of buttered aluminum foil and bake until hot throughout, about 25-30 minutes. Remove the foil and bake about 15 minutes more, until the top is golden brown. 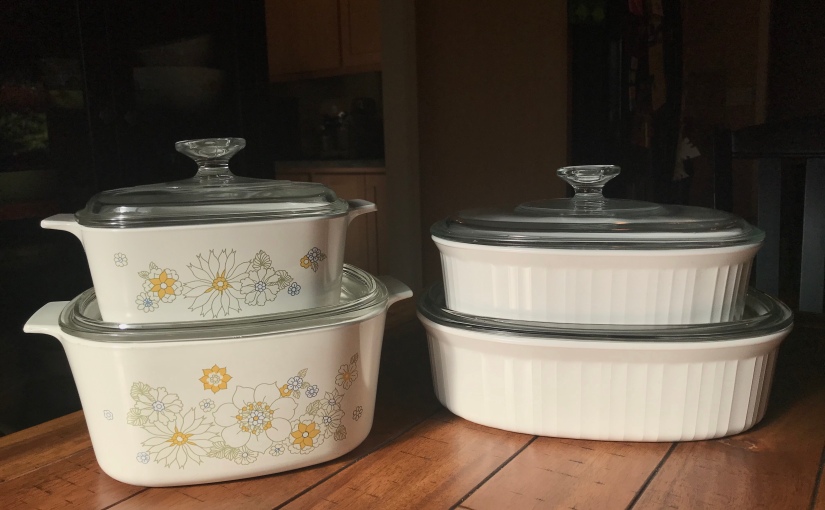 It’s an all-Corning Ware Thanksgiving! At least for my own cooking. I’m not hosting this year, but I signed myself up for a lot of sides. Corning Ware was a natural choice because it can go from fridge to oven to stove to microwave without any problems. And I went with patterns that would go well with pretty much anything else on the table.

If you need a change of pace from traditional cranberry sauce, this tangy no-cook version is an easy and delicious way to bring something new to your Thanksgiving table. The texture is more like a relish or salsa than a sauce, but it pairs just as well with turkey. I’ve also seen it layered over cream cheese to serve as a spread with crackers. 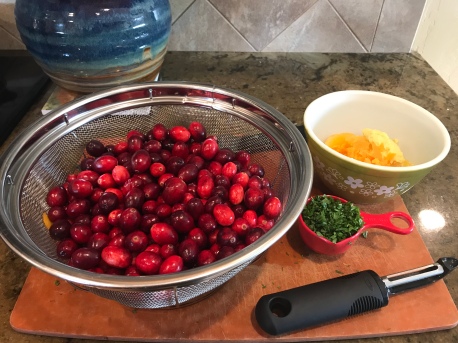 In a food processor, pulse about half the cranberries until they are coarsely chopped, then transfer to a large bowl and set aside.

Remove the zest of one orange with a vegetable peeler, chop the zest into smallish pieces, and add to the food processor. Using a sharp knife, remove the peel and pith from both oranges. Then cut the orange sections away from their membranes and add the sections to the food processor. Add the rest of the cranberries, the ginger and sugar and pulse until finely chopped.

Combine both sets of chopped cranberries, add the mint and stir until well mixed. Cover and refrigerate overnight before serving. 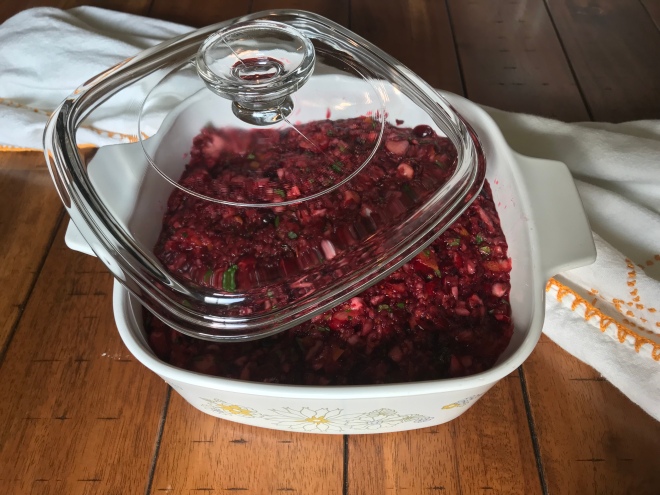 I love breakfast casseroles, but most recipes seem to be designed for 13×9 pans — great for feeding a crowd, but too much for those times I want to make something special just for my own little family. Here’s a scaled-down version that can be done in an 8×8 pan or 2-quart casserole dish. It uses ingredients we tend to have on hand, so I was able to whip it up this past weekend without a trip to the grocery store. Bonus: If you use Corning Ware, you can saute and bake in the same dish! 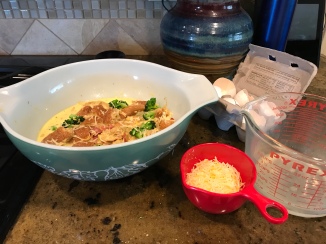 Saute the bacon over medium heat until the fat has rendered and the edges start to brown. Then add the onion and broccoli, and saute until the broccoli starts to cook but is still crunchy. Transfer to a large bowl.

Stir in the bread and 3/4 cup of the cheese. In a separate bowl, whisk together the milk, eggs, salt and pepper (to taste), then add to the veggie/bread mixture and toss until the bread is well coated. Let stand for a few minutes.

Pour into a greased 8×8 pan or casserole and sprinkle with the remaining cheese. Bake, uncovered, until the center is just set and the edges start to brown, about 40-50 minutes. Let rest 10 minutes, then serve.

It was a rainy day today, so we headed to Savers for a little family thrifting. My husband headed to the electronics, my daughter to the toys, and I made my usual beeline to the ovenware. Our local Savers is often a pretty good source of Corning Ware — I find stuff I can’t believe other people have passed up. Today certainly didn’t disappoint: They had a P-34-B dutch oven in one of my favorite patterns, Floral Bouquet Third Edition. It’s in pristine condition, with a lid, and the original roasting rack! Imagine how easily the racks get separated from their pots — so finding them together was a big score.

Interestingly, the walls and bottom of the pot are thinner than other pieces — perhaps designed more for the oven than the stovetop. It can still go on the stove, though, if kept at a lower temperature. I’ve found that Corning Ware generally gets plenty hot even at a medium-to-low burner setting.

I can’t wait to roast a chicken in this thing, and then make gravy in the same pan!

I love cooking for Thanksgiving, but I love planning the cooking even more: looking for recipes, thinking about logistics, choosing the right dishes, coming up with a schedule, etc. I think I like cooking projects more than the cooking itself.

So when I saw this article on The Kitchn about organizing serving dishes for Thanksgiving, I knew I wanted to do something similar. I had already been thinking about setting out my vintage cookware in preparation for the big day, but now I needed to take pictures.

I think this will be a new tradition for me, documenting the mix of dishes I use for holiday meals. For this Thanksgiving, I am going with a variety of greens and floral designs, drawn from my favorite Pyrex and Corning Ware patterns. 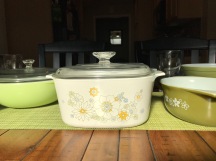 I hesitate to call this dish gumbo because the term is so loaded with a specific food culture. My version is probably not “authentic” — but it’s delicious and hey, I can make gumbo however I want! I think of it sort of as a gumbo soup — hearty but not too thick in the broth department, full of Cajun flavors and with rice and greens mixed right in.

The spice level here is medium to hot — to me that’s zesty but not mouth-on-fire hot. You could cut the red pepper flakes to go milder, or add cayenne to go hotter. Also, if you prefer a thicker stew, you could double the butter and flour. 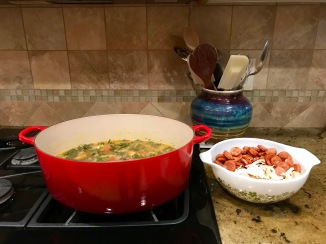 In a large dutch oven, saute the sausage over medium heat until browned and the fat begins to render. Remove the sausage and set aside, leaving the drippings in the pan.

Lower the heat slightly, add the butter and stir until melted. Sprinkle in the flour and stir with a whisk until incorporated. Continue stirring constantly and cook until caramel in color, about 15-20 minutes (actual time can vary quite a bit; let the roux get as dark as you want, being careful not to burn).

Add the onions, bell peppers, carrots, celery and garlic and stir until coated in the roux. Add the diced tomatoes and deglaze, scraping up and stirring in the browned bits on the bottom of the pan. Add chicken broth, thyme, red pepper flakes, smoked paprika and bay leaves. Bring to a boil.

Add the chicken and lower to a simmer. Cover and cook until the chicken is no longer pink in the middle, about 20 minutes. Remove chicken and shred or chop into small pieces, set aside.

Add the collard greens and stir until wilted. Cover and simmer until the greens are tender, about 40 minutes.

Add the gumbo file, sausage, chicken, rice and salt and simmer for a minute, then serve. 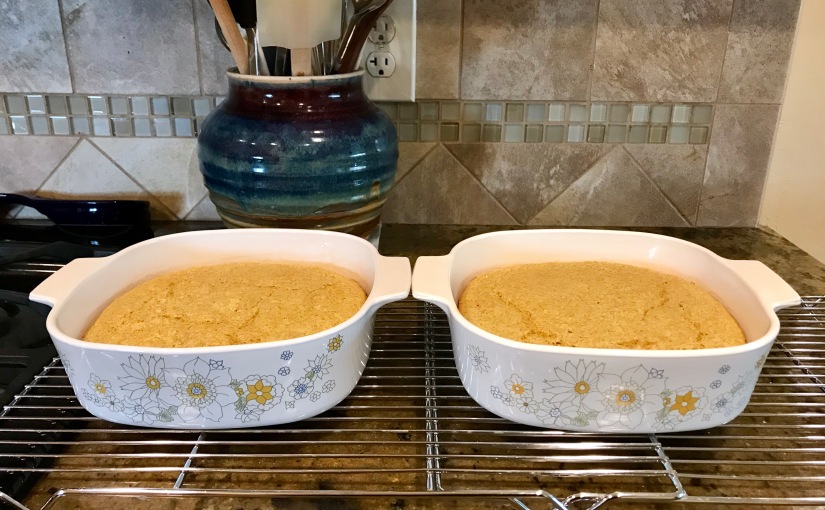 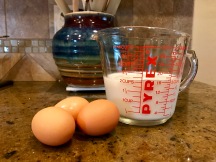 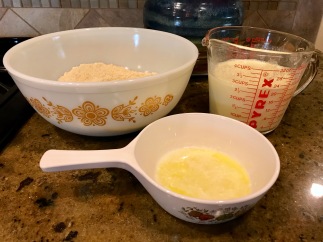 Whisk together dry ingredients in a large bowl. Whisk eggs, buttermilk and milk in a separate bowl. Pour the egg/milk mixture into the dry ingredients and stir until just combined. Stir in melted butter.

Pour the batter into the baking dish and bake until the top is cracked and golden and edges are pulling away from the sides, about 30-40 minutes.

Place the baking dish on a wire rack to cool for at least 1 hour before serving.

These tiny pans from Corning Ware’s Menuette line are so cute, especially in two of my favorite patterns: Wildflower (on top in the above photo) and Floral Bouquet Third Edition (bottom). I found the P-82-B saucepan at Goodwill and the P-83-B skillet at Savers, and couldn’t pass them up even though I tend to prefer models with detachable handles.

The skillet is just the right size to fry an egg, something I’ve been meaning to try in my Corning Ware. Since cooking with pyroceram is fairly new to me, it’s been really fun to get a feel for it. The egg ended up with nice brown crispy bits on the bottom and a slightly runny yolk, just the way I like it. Using plenty of butter was a good idea. 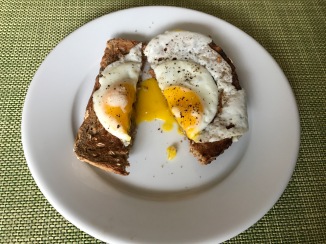 The pans originally came in sets of three with tiny lids, so that gives me a few things to hunt for…. There’s more info about the Menuette line over at the Corning Ware 411 site.