Arcopal’s French Hen pattern reminds me of The 12 Days of Christmas, so I made it the starting point for my Christmas dinner tableware this year. I haven’t had a chance to use my Arcopal casserole dish since finding it last year, so I’m excited to finally put it to work. I’ll combine it with some red and green Pyrex to round out the Christmas motif.

I’m also using some Corning Ware petite pans to make individual bread puddings for dessert. They don’t match, but they’ll allow me to prep the puddings a day in advance and then go directly from refrigerator to oven for baking — so hey, function over form!

The only thing I’m missing is a vintage platter for my Cornish hens. I’m going to have to start looking for one on my thrifting adventures.

I like sweet potatoes, but I’ve never been a fan of that ubiquitous Thanksgiving casserole involving sweet potatoes, sugar and marshmallows. Instead, I lean toward the savory side — sweet potatoes are sweet enough on their own without all that extra sugar, after all.

In this recipe, chipotle adds a smoky flavor that is subtle enough to complement most other Thanksgiving dishes. We’ll be enjoying it tomorrow with turkey and all the trimmings. 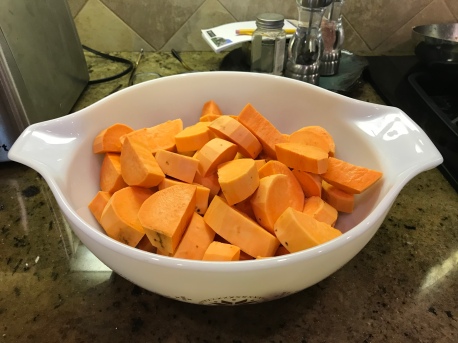 Using your preferred method, cook the sweet potatoes until fork tender. (You can boil or steam them, or use a sous vide machine if you have it: Sous vide is a handy technique because you can attain perfect doneness with very little effort. I cooked my sweet potatoes with the sous vide for 45 minutes at 194 degrees – basically this recipe, minus the seasoning.)

In a small saucepan, combine the butter and cream and cook over low heat until the butter is melted.

Mash the sweet potatoes with the butter and cream in a large bowl. Add the lime juice, chipotle, adobo sauce and salt and continue mashing until smooth.

We are lucky enough to have wonderful neighbors who share produce from their vegetable garden year-round. So when they brought over a monster zucchini recently, I decided to make some zucchini bread. But not just any zucchini bread!

While I love traditional zucchini bread — usually a quick bread leavened with baking powder — there is something really satisfying about baking yeast breads. The smooth feel of well kneaded dough, watching it rise, shaping it — not to mention the physical work and patience required. Plus, you can’t beat the soft, fluffy texture!

So I set out to make a yeasted zucchini bread, something with the flavors of the traditional recipe and just a touch of sweetness, like a breakfast bread. It’s delicious served warm with plenty of butter! 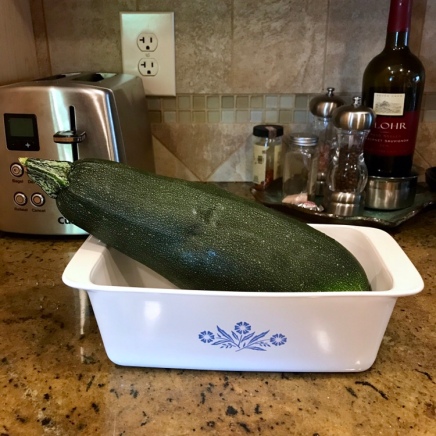 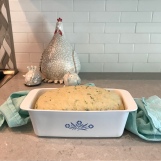 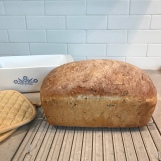 In a large bowl, mix together the flour, sugar, salt, cinnamon and yeast. Add the zucchini and lemon zest and stir to incorporate. In a separate bowl, combine the water, honey and olive oil, then add to the flour mixture.

Knead until smooth. I like to do the bulk of the kneading with an electric stand mixer using the dough hook attachment (for about 4 minutes), and then finish it up by hand. The dough starts out a little wet, so add small amounts of flour as you go (not too much) to keep it from sticking to your hands. The end result should be smooth and slightly tacky, but not sticky. (King Arthur Flour has a nice kneading tutorial here.)

Oil your bowl with cooking spray and place the dough inside. Spray the top of the dough, then cover loosely with plastic wrap or a cotton towel. Let rise in a warm place until roughly doubled in size, about 1 hour.

Turn the dough out onto a floured surface and knead gently for about a minute. Shape into a sandwich loaf (see this King Arthur Flour tutorial) and place into an oiled standard loaf pan. Cover loosely with plastic wrap or a cotton towel and let rise until almost doubled in size, about 1 hour.

Bake until golden brown and internal temperature registers at 190 degrees, about 45-60 minutes. Let cool for a few minutes, then turn out onto a wire rack. Let cool another hour before serving.

Have you ever struggled to cut open a rock-hard butternut squash? It seems like every recipe calls for splitting the thing in half (somehow avoiding chopping off a finger in the process), scooping out the seeds and then roasting the halves in the oven. But there’s a much better way!

When you roast the squash whole, the skin becomes papery, the seeds and stringy bits can be scraped out with a spoon, and the flesh slices like butter. Couldn’t be easier!

After roasting you can cube it up, toss with some olive oil, salt and pepper, and throw it under the broiler until nice and golden brown. Or you can puree it for soup. Or you can slice it and turn it into a pizza topping (which is where this squash is headed).

The whole-roasted method is not my invention, but I don’t understand why it’s not more common. It works for pretty much any type of squash, too. 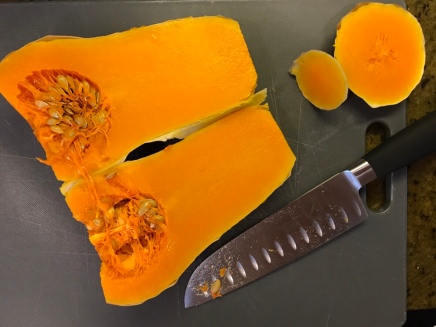 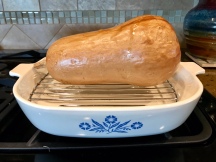 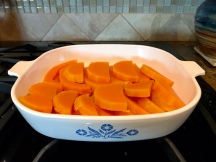 Pierce the squash with a knife several times, as you would a baked potato. Place on an oven-safe dish or baking sheet (rack is optional). Roast until the squash is tender, about 1 hour.

Let rest until the squash is cool enough to handle. Cut off the stem and base, peel off the skin, scoop out the seeds and prep as desired.

Recently we had family coming over for dinner, but we were going to be away from home all afternoon. Perfect scenario for a slow-cooked meal! I decided to make white chicken chili with all the fixings, and it was a big hit. One nice thing about this recipe is that it’s relatively mild — despite the three jalapeños (they mellow out a lot when cooked). Then you can spice it up to taste with toppings.

Adapted from the White Chicken Chili in Slow Cooker Revolution. 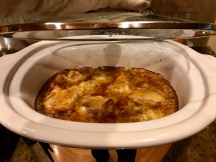 In a large skillet over medium-high heat, saute onions and jalapeños until translucent and slightly browned, about 8-10 minutes. Add garlic and cook until fragrant, about 1 minute. Stir in cumin, coriander and green chiles. Deglaze the pan with 1 cup of the broth, scraping up any browned bits, and transfer to slow cooker.

Add the beans and 2 cups more broth to the slow cooker and stir. Season chicken with salt and pepper and place in the slow cooker, making sure all the pieces are mostly submerged. Cover and cook on low until the chicken is tender and falls off the bone easily, about 4-6 hours.

Keeping the slow cooker on, remove chicken and shred into bite-size pieces (discard the bones). Once the chili has settled, remove as much fat as possible by skimming the surface with a large spoon. Stir back in the shredded chicken and let sit a few minutes until hot.

In a small pot, simmer masa in 1 cup of chicken broth for about 10 minutes to thicken, then add to the slow cooker. Stir in cilantro and add salt to taste. Serve with an array of toppings. 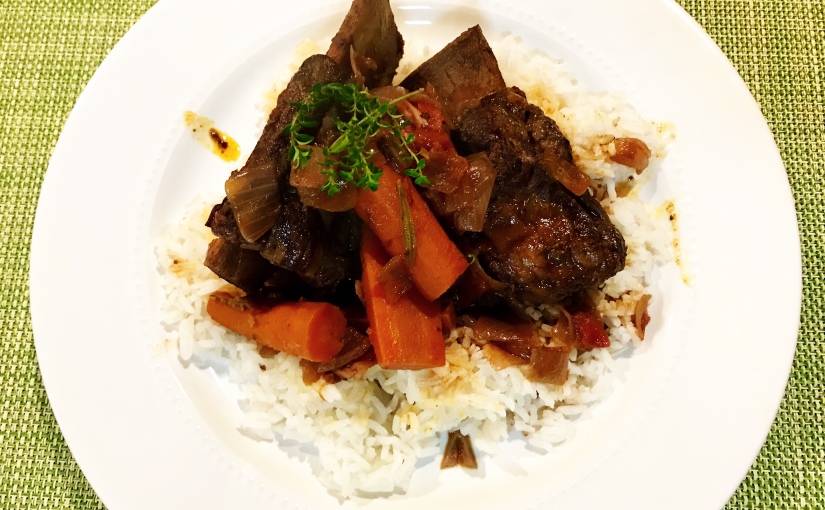 Smoked paprika is one of my favorite spices — it adds a layer of flavor that makes dishes seem more complex than they actually are. Since it’s a major ingredient in Spanish chorizo, it can also make vegetarian dishes taste meaty without the meat — it’s great in braised winter greens, for example. It would also be nice in homemade mac & cheese.

In this dish it brings a smoky deliciousness to another food I’m obsessing over lately: beef short ribs. You could use basic stew meat instead (3 pounds), but the bone-in ribs produce a rich, flavorful sauce that really can’t be beat. Serve over rice, polenta or mashed potatoes.

Adapted from The New York Times’ Beef Stew with Sweet and Hot Paprika. 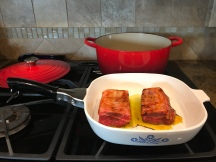 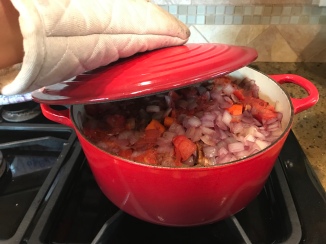 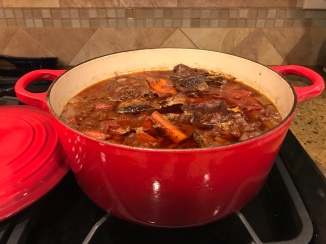 Combine 1/4 cup olive oil and 1 tbsp smoked paprika. Rub the mixture all over the meat, and sprinkle with kosher salt and pepper. Marinate in a large, covered bowl for at least 2 hours, preferably overnight.

In a large skillet over medium high heat, heat up 2 tbsp of olive oil and brown the meat in small batches (avoid overcrowding). Add more oil as needed. Transfer the meat to a 5-to 6-quart dutch oven as you go. Add the carrots, bay leaf and rosemary to the dutch oven about halfway through.

Lower heat to medium. If you have a lot of charred spices in the skillet, remove by wiping with damp paper towels. Then add the remaining olive oil and onions and saute until translucent, about 5 minutes. Add the garlic and saute until fragrant, about 1 minute more. Season with salt and pepper to taste. Stir in 2 tbsp smoked paprika along with the cumin, marjoram, cayenne and lemon zest.

Add wine and simmer for a minute, stir in diced tomatoes and then transfer everything to the dutch oven.

Bring to a boil, then lower heat and simmer, covered, until the meat is tender, about 3 hours. Remove the meat and set aside, covered with foil to keep warm. Skim most of the fat from the sauce and then simmer about 10 minutes more to reduce a little. Add the meat back in and simmer another couple minutes, then serve. 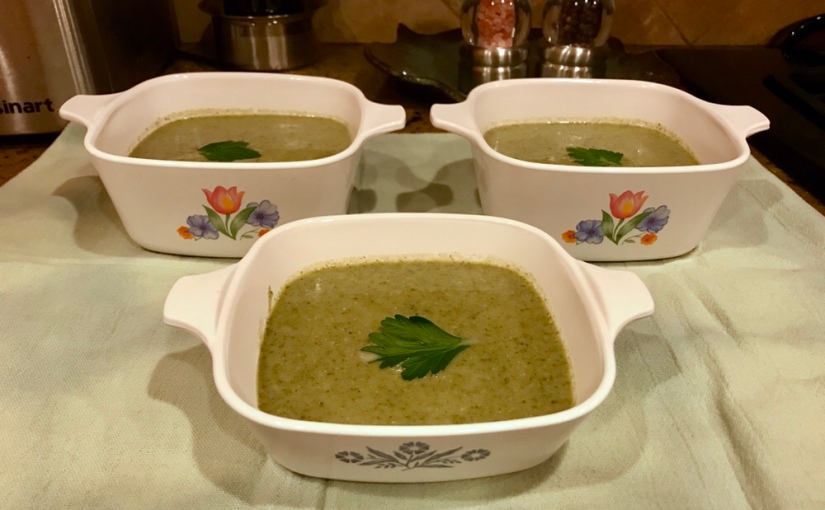 This recipe started as a desire to recreate the homemade cream of broccoli soup I had growing up. These days, all you ever see is broccoli cheddar soup — but the soup I know and love is pure broccoli and cream, no cheese required.

So when I picked up a copy of The Frugal Gourmet at Hope Thrift recently, I was delighted to find that Jeff Smith’s recipe for cream of broccoli soup is the one I remember (in fact, I’m pretty sure my parents had the same book in their kitchen). Of course, I can’t help but tweak things, and I found myself wondering how green the soup would turn out with the addition of some kale, among other changes. The answer is … very green!

I recommend serving with garlic bread or a nice crusty baguette. 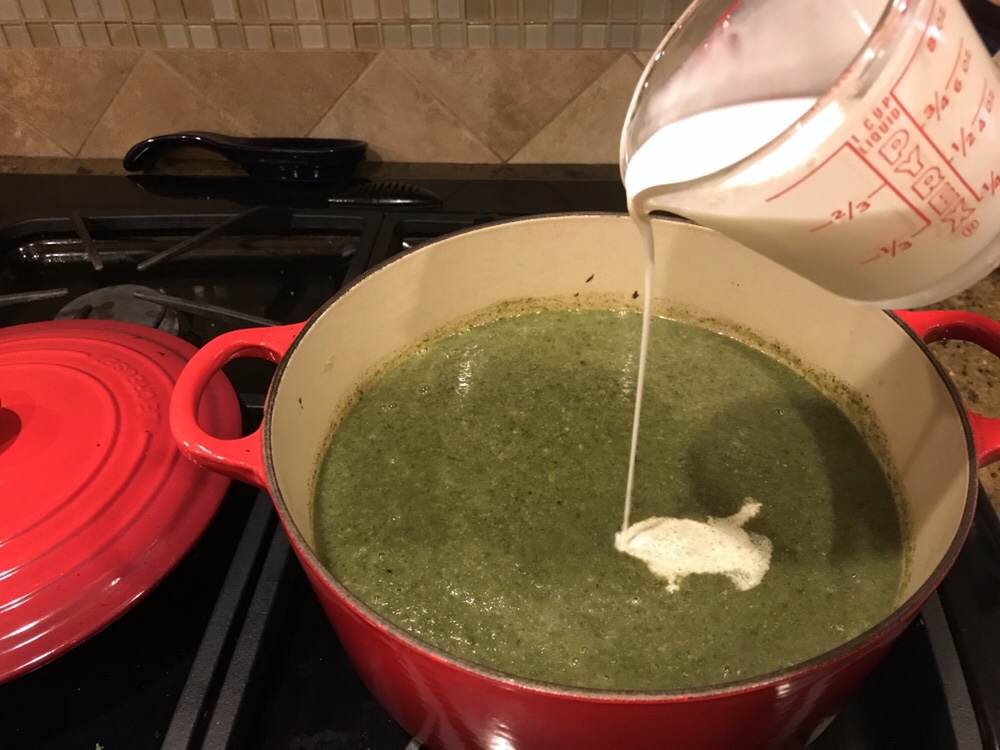 In a dutch oven over medium-high heat, saute onions and celery in the butter until translucent, about 5 minutes. Add the garlic and saute another minute. Stir in the kale a handful at a time and cook until wilted, about 2-3 minutes.

Add the broccoli, potato, chicken broth, bay leaf and thyme. Bring to a boil and then simmer, covered, until the kale, potatoes and broccoli are very tender, about 15 minutes. Turn off the heat and puree the soup with an immersion blender (or in a regular blender) until your desired level of smoothness.

Return to low heat and stir in the cream, cooking until the soup is hot. Season with salt and pepper to taste. Garnish with chopped parsley and/or croutons.