The weather is warming up in Northern California, and I’m having a hard time letting go of stew season. Plus, I’m on a mission to test out recipes that might freeze well for ready-made summer camping meals. This one fits the bill, though I might try adding white beans next time for extra protein.

Side note: Ever since I made this Slow Cooker Pork Stew with Hominy, I’ve been wanting more hominy in my life! I don’t know how I overlooked the chewy goodness of nixtamalized corn kernels for so long. This hominy stew really lets them shine.

Use kitchen shears to snip bacon into 1/2-inch pieces, then place in a large pot or Dutch oven. Cook over medium heat until browned and crisp, about 10 minutes. Transfer bacon to a plate lined with a paper towel and set aside.

Remove all but 1-2 tbsp of the bacon grease from the pot, then add the onions, poblanos and jalapeños. Sprinkle liberally with salt and pepper, then saute over medium heat until softened, about 10 minutes. Add the garlic and cook until fragrant, about 1 minute more.

Add the hominy, tomatoes, chicken broth and lime juice and stir. Bring to a boil, then turn the heat down and simmer, covered, for 20 minutes.

Uncover and continue to simmer for 10 minutes. Stir in masa and simmer 5 minutes more. Add lime zest and cilantro, then season to taste with salt and pepper. Serve topped with bacon. 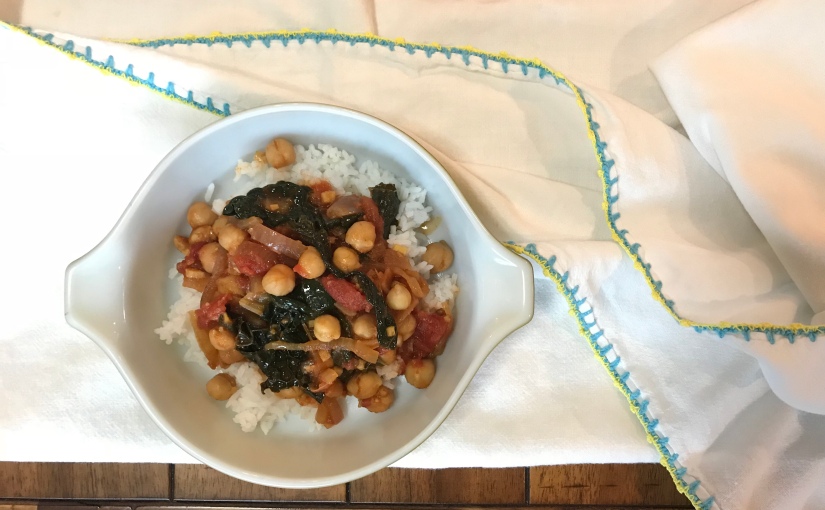 Recently my daughter and I were making a curry dish from a kid’s cookbook, and I couldn’t help but modify it to my own liking. Plus, there were so many problems with the recipe: It called for a single leaf of kale (is that ever enough for anything?), used way too much salt, listed a bake time of 20 minutes (no baking was actually involved), and was illustrated with a drawing of a red onion that looked exactly like a rutabaga (which just didn’t inspire much confidence!).

So I was pleasantly surprised when our version turned out very tasty! The recipe is designed to be kid-friendly, so it’s not spicy, and lends itself to some kid help along the way. My daughter particularly enjoyed tearing up the kale, rinsing the garbanzos, measuring the water and spices, and stirring the pot.

In a medium pot over medium-high heat, saute the onion in oil until translucent, about 5 minutes. Add the garlic and ginger and cook until fragrant, about 1 minute more.

Stir in the curry powder, salt, tomatoes, garbanzo beans and water. Bring to a boil, then turn down the heat and simmer, uncovered, for 15 minutes, stirring occasionally. Add the kale and simmer until tender, about 10 minutes more. Add salt to taste.

This is my comfort food: a classic American one-pot dish made with pretty basic ingredients that come together into something delicious and belly-warming. It’s also pretty hard to screw up! Case in point: While cooking this last night I accidentally added some tea- and anise-infused simple syrup that I mistook for the mushroom-infused soy sauce I wanted to use (both of those were homemade items in similar-looking mason jars). I quickly realized my mistake, so I put in the soy sauce too and hoped for the best. And it still came out pretty tasty! Maybe a tad sweeter than usual, but not that noticeable. Hooray for a foolproof dinner!

Adapted from Classic Goulash on Allrecipes.com.

In a medium pot over medium-high heat, saute the onions until translucent, about 5 minutes. Add the garlic and cook until fragrant, about 1 minute more. Add the ground beef and cook, breaking the meat up into bite-size pieces, until no pink remains.

Stir in the diced tomatoes, tomato sauce, water, soy sauce, Italian seasoning and bay leaves. Bring to a boil, then turn down the heat, cover and simmer for 20 minutes, stirring occasionally.

Skim off any excess fat with a spoon. Add salt to taste (about 1-2 tsp). Then stir in the macaroni, cover and simmer 10 minutes. Uncover and continue simmering, stirring occasionally, until the pasta is tender, about 10 minutes more.

Remove from heat. Take the bay leaves out, then stir in the cheese and serve.

I love me some vintage enameled cast iron! Luckily I don’t see it much in thrift stores — otherwise I’d have a real storage problem on my hands.

Descoware dates back to the 1950s through the ’70s, when Le Creuset acquired the company’s patents (and subsequently killed the brand). It’s known for durability and for weighing less than other kinds of cast iron cookware. Julia Child was a fan, and featured it frequently on her cooking show. There’s not a lot of online resources on Descoware, but the Descoware fan site and Cool Finds blog both provide some good info.

I found this little Descoware terrine at Savers, and it looks virtually unused. The cherry flame color, a red-to-orange gradient, was the company’s trademark design. It holds about 3 cups — a size designed for meatloaf or pâté, but which could also be handy for bread pudding, hot party dips, or even a really decadent mac and cheese. I’m looking forward to trying it out!